Handcuffed Hottie in a Hood 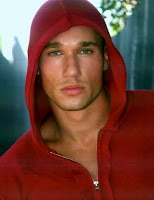 This is a response to a post (well, comments, actually) on Tam's blog.  (Sorry, I couldn't find just the right photo for Wolfie).

Once upon a time a beautiful young man strolled along the walk by the river through the woods.  Despite the bright sun that warmed the day, he wore a red hooded jacket, and kept the hood up, as that was the fashion for beautiful young men in those days.  He also wore pants that threatened to fall right off his hips; they certainly did expose the waistband of his red boxer shorts.

Well, Red was on his way to his grandmother’s house, sent there by his mother to bring a treat to the ailing old woman: Pepe’s burritos from Joe’s diner.  The half-dozen burritos nestled in one Gladware container hidden under the folds of a towel in the canvas bag Red carried.  Red’s mom didn’t want to worry about getting one of her good dishes back from Grandma, who tended to throw things away rather than wash them.

Red stopped along the way to feed the ducks with stale bread he brought along for that purpose, and to buy a sundae cone from the Good Humor man, and to watch the university students practice rowing on the river.

He was leaning on the rail, enjoying his ice cream, when a man appeared next to him.  They nodded at each other.

“Nice day,” said the man.  He wore a shirt that must’ve been a size too small, because every line of every muscle showed.  He hadn’t shaved for a day or two, maybe.

“Um-humm,” said Red, licking the cone and giving the man a once-over.  Red really liked his eyes. And arms. And his slightly shaggy hair.

“I’m Joe.  Joe Wolferman.” The man turned toward Red. “But my friends call me Wolfie.”  He sniffed appreciatively at the bag Red carried.  “What’s that you’ve got there?”

“Burritos.  For my sick Grandma,” Red said.  He had reached the last bit of the ice cream cone, and some of sweet stuff dripped out the bottom.   He tilted his head back to suck out the last of it.

Wolfie watched with interest as the young man’s adam’s apple bobbed as he swallowed.  When Red felt those eyes hot upon him, he stopped sucking and stuffed the end of the cone in his mouth.  Sheepishly he chewed and swallowed the last of it.

“Come along and I’ll show you.”  Wolfie held out his hand, and after a moment’s hesitation Red put his hand in Wolfie’s.  Wolfie grinned, showing his remarkably white teeth.  “Let’s go over here. There’s a trail.” Wolfie led him along the garden path, into the woods, where a little gazebo stood in a clearing.

They entered the gazebo.  Wolfie took the bag of burritos from Red and set it down gently by the door.

Red looked around the small space, and up at the rafters.  “This is…nice.”

“It is.  It’s the perfect place.” Wolfie advanced on Red. “Do you like to play games?”

Red backed up until his back hit the wall.  “What kind of games?”

“You know.  Games.” Wolfie bent down and kissed Red, just like that.  Red gasped at the pressure of Wolfie’s lips against his, and in that second Wolfie’s tongue jutted in and twisted around Red’s.  Red gave himself over to the kiss.  Wolfie’s hands stroked his arms.  Red became lost in the sensation of this beautiful man kissing him, rubbing him.  So much so that he didn’t notice the handcuffs on his wrists until he tried to bring his arms up around Wolfie’s neck.

Wolfie looked quite smug. “Heh,” he said.
Posted by wren boudreau at 7:10 PM