More happy happy!!  This just sucked me right in.

Now I must return to reading Kresley Cole's Demon From The Dark!

Music that makes me happy!

This is my favorite song these days.  When I hear it, I have to move, and then I have to play it again.  And maybe again.  So I thought I would share.  Scissor Sisters: Fire With Fire.

I love that they are driving around on a sort-of fire truck.  The action of the vid isn't all that stupendous, but I think the song is fabulous!
Posted by wren boudreau at 12:47 PM 7 comments: 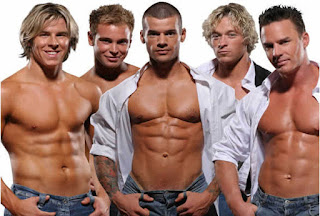 I think I just needed a bit of summer vacation.  Feeling better now.  And happy to tell you that I have a new book with Loose Id, to be released October 5!!!!


It's called
Back To Normal
Loose Id is having an event in honor of National Coming Out Day; I don't know what they have planned, but I imagine they are releasing a bunch of, or some anyway, books with that theme.
Here are the main characters in Back To Normal:
Hero 1: Greg Capello
Hero 2: Finn Sparks

And here are some of the things that happen:

So, yeah, I'll be around a little more often now.  See ya round the webz!
Posted by wren boudreau at 2:12 PM 19 comments: