Wolfie caressed the beautiful round globes of Red’s ass then massaged his way up Red’s back and down again.  Red tried to push up from his position over the table, but Wolfie pressed down on his shoulders.

Wolfie’s pants had been tight to start with, and now it seemed they would strangle him.  Still he wanted to take his time. He shifted a little and stretched himself over Red’s naked body, sliding his hands up Red’s arms. He kissed Red’s shoulders and neck; the man smelled delicious, and so Wolfie licked small circles on Red’s skin. He tasted delicious, too.  Wolfie could feel the hitch in Red’s breathing.

As Wolfie stood up, Red twisted to watch him.  “I’m not going anywhere, Red.”  Red lay back down, and Wolfie smiled at that.  He grasped the bottom of his T-shirt and pulled it off in one smooth motion, shaking his head so his shaggy hair fell back into place.  He knew Red was looking over his shoulder to see what he was doing.  Wolfie took a moment to stretch.  He brought his hands down to his own chest and tugged at his nipples, enjoying the slight burn.  He rubbed his stomach and dipped his fingers just under the waistband of his jeans.  Red strained to get a good look at him.

“My, what rock-hard abs you have,” Red said.

“The better to control my lifting and lowering,” Wolfie said.  He slunk around the table, stopping at a point where Red could reach him with his cuffed hands. “Open my pants, Red.”  He knew he was already leaking pre-cum from his confined cock.

The younger man looked up at him, paused only a moment and reached for Wolfie’s buttons. Wolfie enjoyed the sensation of Red’s trembling fingers brushing against him as he opened each button.  Red spread the placket, and Wolfie’s shaft strained against the soft give of his boxer briefs.

Red licked his lips.  “My, what tight clothes you wear.”

“The better to enjoy letting loose,” Wolfie said. Red reached a tentative finger out, but Wolfie grabbed the cuffs before Red could reach him.  “Suck me.”

Red pulled himself forward until he was close enough to touch his lips to Wolfie’s cock.  Wolfie felt a gentle kiss, a lick and then suction as Red found a way to get his mouth around him despite the cloth in the way. It felt so good he let out a groan that was almost a growl.

He grew harder with Red’s attentions. When he felt like thrusting, Wolfie pulled himself away from Red’s puffy lips.  Red gave a disgruntled moan then watched hungrily as Wolfie stepped back.  He toed off his shoes and peeled off his briefs and jeans.  Wolfie stretched again, feeling the pull in his muscles, displaying himself for Red.

Red’s Adam’s apple bobbed as he swallowed. “My, what a big cock you have.”

“The better to fuck you with, baby.” 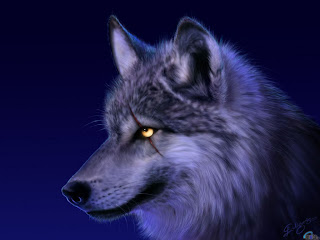