Are there things that pop up in your reading that just pop out at you as wrongwrongwrong?  They aren't terrible, egregious things.  They're just enough to irritate.

Kind of like picking those little burrs* off your socks after a hike, 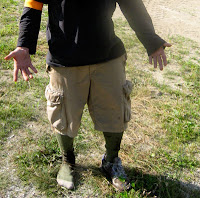 as opposed to losing a shoe in a mud hole.


For example, I recently came across the phrase "just assume" in a place where "just as soon" would have been the thing to say.  And "taunt" instead of "taut".

I think someone has changed the rules of irregular verb tenses for certain words since I learned them, because I consistently come across "sunk" where I think "sank" should be used. Am I the only one who does a little head shake when that happens? I've googled this and discovered there seems to be no definitive answer out there.  Who knew?

*English language brought to you by Chris, and K.Z.
Posted by wren boudreau at 12:19 PM