I haven't written here lately because I'm just boring myself to death, so why share that?


Had a great time in Jamaica.  It was beautiful there.  We stayed on the south side of the island, so there really isn't anything but the resort.  The perfect solution to my annual birthday mopage. Here is the view from our balcony: 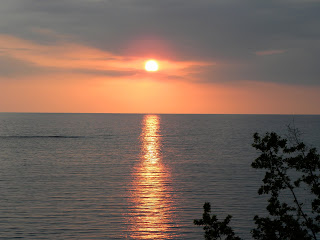 Not surprisingly, I have discovered that my aging skin has taken a dislike to strong sun.  Burns easily, needs shade.  And my face - ack.  Little zits all over.  I thought one of benefits of aging was no longer having a 13-year-old's skin. *deep sigh*

While sitting in the shade on the beach, I read lots of books.  Mostly urban fantasy (made of paper, because I didn't want my Kindle to get sandy) - Underground by Kat Richardson, Unshapely Things by Mark del Franco, Pleasure of a Dark Prince by Kresley Cole, Dead to Me by Anton Strout. I noticed that when I did read an m/m romance (All's Fair in Love and Advertising, by Lenore Black) I appreciated it so much more than when that's ALL I read.

I also read Almost Like Being in Love, by Steve Klugar.  What a wonderful ride that was!

I ruminated a lot on my next book. I've been scratching away with some ideas, but lying about with my eyes closed made me think more about them, sort of tossing and turning them in my head.  So in the last week I think I've ditched most of the original idea and molded it into something more interesting.  I even *gasp* sketched a bit of an outline, more like bullet points really.  It's definitely going to be a paranormal.

While my son goes on spring break, we are kittysitting.  He was supposed to bring them to us this past weekend, but his car broke down, in need of a new engine.  So I drove the four and a half hours to his place on Saturday, and drove back on Sunday, cats in hand. Or car, I guess.  I had cats for much of my young life, but it's been 10 years or so.  And these two have strong personalities. 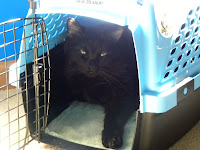 Spike is a basement cat, as you can see.  And while he appears ready to go back to his daddy, it's all just an act.

Buffy is the sort of cat you just want to pick up and cuddle, and she puts up with it graciously, just a roll of the eyes. 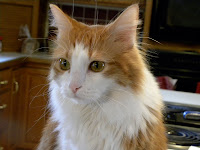 My husband gets his coffee cup ready while the coffee is brewing, dumping powdered creamer and sweetener into the cup.  Guess who he found sticking a paw into the cup and then licking off the cream and sugar?  That would be Spike.

Buffy has a cat-sense about when I'm in the bathroom and comes looking for attention, if the door's not latched she just pushes right in.  She came from nowhere at 4 in the morning to do this.

The dog seems to have gotten used to the cats from their previous visits, no longer hiding in the laundry room.  But he is wearing his "when are they leaving?" face.