Handcuffed Hottie in a Hood, part the third 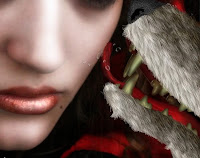 Wolfie cupped Red’s ass cheeks in his large hands and squeezed. Red liked that a lot, and he moaned. Wolfie’s tongue dragged down Red’s hairless chest and abs, and Red’s muscles twitched at every sensitive spot the big man found. He wished his hands were free. He wanted to touch Wolfie, run his fingers through the thick dark hair, and over the big, tight muscles. He pulled at the restraints even though he knew he couldn’t slip out of them.

Red could feel the shape of Wolfie’s smile against his skin.

“I should probably, um…” Red stopped when the other man sucked up a mark on his stomach. “Oh. I should…the burritos…my grandma.” He knew there was a complete thought in his head somewhere; the words were scattered every which way, though.

When the strong fingers popped open the button of his pants and lowered the zipper, Red stopped breathing for a minute. The pants dropped straight to the floor since they were already loose. Wolfie knelt on the floor and ran his hands lightly up and down Red’s thighs and around to his calves. He put just enough pressure in his touch on the back of Red’s knees so that it didn’t tickle; instead, it made Red’s cock push even harder against his boxers.

Wolfie mouthed Red’s cock over the fabric. There were little moany, whimpering sounds and it took a second for Red to realize he was making them. Wolfie’s hands traveled up the back of his legs, under the legs of his boxers and onto his ass. When Wolfie squeezed the round muscles, Red’s whimpers turned into groans.

Wolfie leaned back and looked up at Red through long black lashes. The tip of his tongue traveled back and forth across his lower lip as he slowly - oh so slowly - drew down Red’s boxers. He stretched the waist over Red’s weeping cock and under his balls, then smoothed it down over his ass. He pulled gently on the fabric to bring the shorts down Red’s thighs, over his knees, to rest on the pants already pooled at his feet.

Red let out a shaky breath. “You’re very good at this.”

“Yes. I am.” Wolfie smiled his white-toothed smile. He pressed a kiss to the crease where Red’s thigh met his hip, first one side and then the other. He tongued the balls in their soft sac.

“Please, I can’t.” Red couldn’t think is what he couldn’t.

“Shh.” Wolfie hissed the sound as he mouthed his way up Red’s cock. Red had never seen anything so sexy in his life. As Wolfie’s talented tongue and lips caressed every bit of him, Red’s body melted a little, his arms hung without tension in the cuffs, his back and shoulders rounded a little. When Wolfie took Red’s cock into his mouth and throat, though, Red’s body clenched. Big hands pressed his hips back against the wall, keeping Red still, letting Wolfie do the work of sucking, licking, sliding up and down and generally driving Red crazy.

Red wanted so badly to grab Wolfie’s hair, hold his head still and thrust. He couldn’t do any of those things. Wolfie must have felt the tension of Red’s body, because he sucked harder, slathering Red’s cock with saliva and sliding his tight fist up and down. The pressure he put on the sensitive spot just below the cockhead was what sent Red right over. He came with a shout, spurting into Wolfie’s greedy mouth. The man savored it, licking Red’s shaft until Red shuddered and let out a deep sigh.

Wolfie stood and returned to kissing Red. He could taste himself in Wolfie’s kiss and that made him more eager and open. Wolfie caressed his chest, his abs, his arms. He ran his tongue around Wolfie’s and bit at his lips. Wolfie chuckled deep in his chest. He reached around behind Red.

It took Red a moment to realize the cuff on his right hand had loosened enough that he could pull his arm free. He tried to bring it around so he could touch Wolfie, but the muscles were cramped so he had to move slowly. Wolfie massaged his shoulders and arms and helped him bring them forward, pulling the hoodie off as he did so.

Red was just about to thank the bigger man for releasing him, when he felt the pull of the cuffs on his wrists again, this time in front of his body. He shook his head and looked up at Wolfie.

“Oh, we’re not done yet, little Red,” Wolfie growled. He pulled Red’s shoes off, then tossed aside the pants, boxers, even the sweatshirt that puddled on the floor.

“W-w-what are you doing?” Red asked even though he could guess. He was standing there naked, handcuffed, in front of a very large, very aroused man.

Red had played around quite a bit. He knew about kissing and hand jobs and blow jobs. But there was a lot he didn’t know about. Not up close and personal, anyway.

Wolfie pulled him forward by his cuffed hands. He stood him in front of the picnic table that sat in the center of the gazebo and then pushed him down. Red’s chest hit the table. With his feet still on the floor, his ass made a perfect target.