We've had a busy few days.  I'm jotting down a few of the stand-out moments... 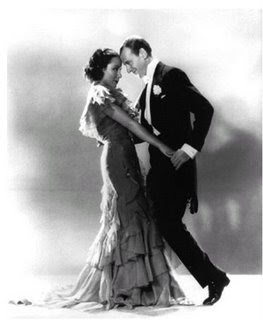 Friday evening - Husb and I attended a fundraiser dinner for a local charity.  The big event was a dance contest of sorts, where local 'celebrities' danced with pro dance instructors.  The celebs were to drum up votes at $40 each, all to go to the charity.  It was fun.  They'd been practicing for weeks on their dance number.  Some did salsa, some foxtrot, some swing.  A la Dancing with the Stars.  Anyway, we're sitting at our table, watching, and Husb leans over to me.
Husb: Give you any ideas?
Me: (Of course it did, but I wanted to hear what he was thinking) Like what?
Husb: You know.
Me: Yeah?
Husb: For a story (waggles eyebrows).  One could be in drag.
Me: (Having already generated plot bunny) That's brilliant! 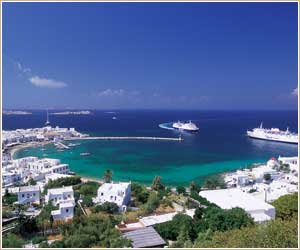 Saturday - Husb and I discussed summer vacation plans.  Our son is going to join us, and so we're giving him a choice.  One - United Kingdom, some sort of land tour, or two - Mediterranean Cruise.  If you were at DIK Blog a while back, you saw Jenre's Post about romance novel tropes and a little discussion about researching Greek Billionaires.  Such irony that now we were seriously talking about a cruise that will take us to a few of those Greek Isles! But today, Boy informed us that if he gets to choose, he'd rather go to England and/or Ireland. 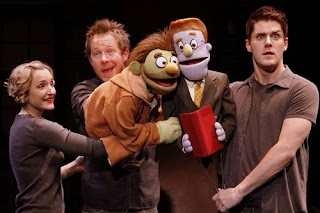 Saturday evening - We went to see a production of Avenue Q, which is an adult muppet musical.  There's a gay muppet - Rod (holding book in picture) and his not-gay roommate Nicky.  Rod denies that he's gay until near the end of the show and after intensive therapy.  And Nicky finds him a boyfriend, Ricky, who happens to look just like Nicky, because Nicky knows Rod's type.


Beyond that, though, there was muppet sex.  I kid you not.  Princeton and Kate Monster (see photo below) went out on a sweet date.  The Bad Idea Bears showed up with Long Island Iced Teas and our protagonists got drunk, went home and had sex.  Accompanied by the song "You Can Be As Loud as the Hell You Want (When You're Makin' Love)".  I thought it was hysterical.  My dear husb, however, was, well, shocked.  I think it was a "Please bleach my eyeballs" moment for him.  We discussed it at intermission: 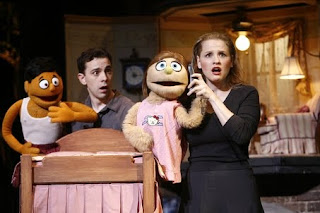 Husb: That's just not right.
Me: I thought it was hysterical.
Husb: Muppets are supposed to be cute.  They're for kids.
Me: Do you need to go home?
Husb: No.  Just...I can't think about muppets that way.
Me: Well, these are grown up muppets.


Wishing you all a wonderful week!
Posted by wren boudreau at 6:35 PM